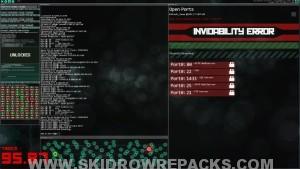 Developer Update and Hacknet Patch 3 (v3.011) : I recently returned from SimTecT, where Hacknet was lucky enough to get win the 2015 Serious Games Showcase and Challenge Indie Award, and I’ve released an area to solve one of the most pressing conditions that turned up while I was gone.

Especially, the Junebug error has been addressed (very sorry to every one who was afflicted with this!). I’ve fixed several other smaller issues, including the quickload buttons around the load screen being broken for many users, generating some stabilization improvements for the save system as i work with the greater fix.

I’ve also confirmed that i’ll be flying out to PAX Prime in the future to indicate Hacknet there – if you’re around, say hi!

I’ve got loads to make amends for after being out of contact at the convention, so I’ll be working through messages and posts while i can within the next few days. Thanks for all your great feedback, all of the really helpful reports, and all sorts of your patience using the bugs. I’m working on it!