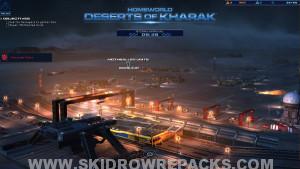 Singleplayer campaign took me about 12 hours on the hardest difficulty setting, I got wrecked by the AI a few times and had to restart or reload from a save multiple times. The story is well written and executed, it is mostly fed to you through cutscenes and animatics. Even for fans of the original titles (who kinda know how the game is going to end, after all it`s a prequel) there are plenty of surprises!

Multiplayer/Skirmish is fun but it suffers a bit from the low map choice (5 maps at release). At least in “Artifact Retrieval” mode (basically capture the flag) the AI can be very, very challenging actually, I can not confirm the experience of some reviewers here. Note that keys can not be rebound at the moment, though the standard layout of the quickbuttons is okay and usable.

Performance was good on an i3 and a GTX 650 Ti, FPS did only drop in very, very, very intense situations (lots of units and boom). No major bugs encountered, except for an UI bug that caused returning from the options menu to be quite a wait (30 secs+). Only ever had a single crash so far, this occured right before loading a new mission.

Although the title obviously still needs some work I am satisfied with this purchase and excited for upcoming new content (free maps have already been promised, further DLC are “in the pipe”).