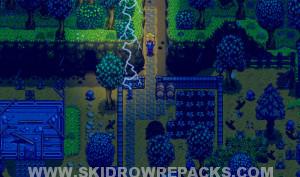 I haven’t had the game crash albeit only playing for 9 hours. So I will not list that as a con. I think they fixed that.
Now, this game is fantastic, don’t get me wrong. There are several cons which I think the devs should ponder and incorporate fixes to.

The fishing. Oh God, the fishing. It is horrendous. I am all for fishing being a little harder and not extremely simple and easy to get the fish. It wouldn’t be fun if it was easy. However, the fishing system is regrettably very frustrating. You cast your line, left click when there’s an exclamation point (easy peasy), but then a pop up box appears with a green bar and a fish with a meter on the right side. So now you’re thinking “Oh, okay I just have to move the bar and keep it on top of the fish so that meter fills.” Correct. However, the slightest touch on your up or down keys makes it zip straight up to the top or straight down to the bottom. There’s no in between. Anywhere you look you’ll see people saying “just practice, you’ll get the hang of it.” I’m not sure what type of keyboard they’re using (or controller, I haven’t used mine yet) but fishing is incredibly frustrating. I think I’ve caught maybe 4 fish? That was when I was lucky and the fish stayed down at the bottom and didn’t move. So the fishing seems broken to me in my own mind. I don’t like it. I don’t think it works well.

There isn’t a tutorial. I’m not someone that loves tutorials that last FOREVER and repeat the same things over and over and over. I just like the basic ones that give you h=the gist of how to do things and that’s it. They don’t teach you how to fish. I kept reeling in at the exclamation point and nothing was happening so I thought I was doing something wrong. I had to look it up to see that I wasn’t doing anything wrong, it just wasn’t working for some reason. Also, it never tells you that the best places to fish are where you see the bubbles. (Can you tell the fishing is bothering me? haha)

Another annoyance (not a big deal, it’s just annoying) is when you’re in your chest, you can’t rearrange items in the chest. I don’t know if this is because your inventory is open or what, but it’s very annoying sometimes. Also, it doesn’t bother me too much since I play other games with this mechanic, but clicking on the doors to open them is rather annoying too. NPC’s don’t hint to you that it’s their birthday, or that their birthday is coming up. I missed about 7-8 birthdays because I didn’t know when their birthday was. (I know there’s a calendar that you can check, but I don’t want to stop there every single day and click on a calendar to see their birthdays when I’m busy trying to get stuff done. )

Now, I know this review has been negative so far, so don’t let those things deter you.

I LOVE the fact that Stardew Valley v1.0.3 Full Version actually has a night/day cycle. I think those are awesome and I think they really help the game out a lot. It makes it semi-realistic and a little more relatable. Also, you have an energy meter. That’s an awesome feature. It limits you and makes you plan out what you can do each day. I mean think about it, would it be fun if you could just get everything done in one day and “beat” the game in three days? No, it wouldn’t be.

I really like that there’s a relationship/offspring mechanic in the game. I think not enough games incorporate this. It’s fun being able to have your own family in games especially when you’re #ForeverAlone (haha). I like the gift giving in this game (although they don’t have the NPCs ever tell you what things they like, which is annoying). I love that you have to work at the relationship instead of everyone already loving you automatically.

Stardew Valley v1.0.3 Full Version is VERY pretty. I think they did a fantastic job on the graphics. It’s very pleasant to look at for 10+ hours a day haha. The BGM is decent. I tend to not pay attention to music or have BGMs turned off and my own stuff playing instead, but I actually like this BGM. I think ChuckleFish did a great job.

There is a bit of combat in this game and as far as that goes, it’s pretty straight forward. It’s simple and easy (some things just take a while to kill). I believe this is only in the mine where there’s actual combat but I’m not very far so I’m not 100% sure on that.

From what I have seen and experienced so far, I think the game is great. They definitely have stuff to work on still, but even so, it’s quite enjoyable. I hope I haven’t scared you off from my cons up there. It really is worth it! I haven’t touched my computer in two months until my husband bought me this game so I’ll be binge playing this one (My point here is that it’s fun so play Stardew Valley v1.0.3 Full Version now) 😀

Fixed a variety of issues, and made some changes/additions!