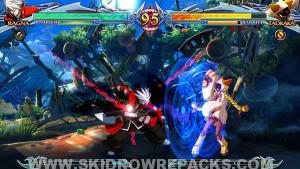 I can saw without a doubt this has been one of the best versions of the games. Learning the mechanics for each character can take some serious work, especially for the challenge mode. But its the best way to understand how to combo with each character. But the balance for each character and their abilities have been adjusted for each character to a much better degree than the previous titles. Even the story mode has a simple ark to follow rather than going through 20 individual stories like with Calamity Trigger or Continuum Shift. Not to mention trying to get 100% through the true, bad, and gag endings. But the gag scenes are all their for each character and has fit in well for the same humor to follow. The extra modes in this title no doubt will give a few newbies a rage run given the extended difficulty. But even under the fustration of learning aall the Distoration Finishes and Astral Heat finishings, the characters are still strong and makes one want to dive deeper into mastering the characters fully. I will give one warning, the story will still confuse some that have not seen or played through the others since some things may not make sense. Even then, its still a great story to follow up with and the fighting is just as intense. But with all the characters having their mechnical features, Bullet is a really tough one to take up. Not just her special mechnic of heat drives and dives seems pretty weak. Not to mention she does not have the best moves to open up to in combat compared to those that are faster and have range attacks. So fair warning if using her in anything… and I know there might be someone that knows how to use her better than me, but this is just a simple perspective and oberservation given the time I have played this game. In terms of time for the game, if you want to get through everything and unlock all thats possible, following up with Abyss Mode to get the most currency out of the game… its most likely to be 40-50 hours of game time for a first time run. Especially if you want to get through the hard modes and higher levels. Pratice will make perfect.Im excited to see this not just come to Steam, but now I can take Makoto Nanaya anywhere and crush all that stand before her! Sorry, I just love that character for her personality and kick buutt power! Moving on, the music continuews to hold strong for not just the characters themes: but for the background themes too. Making the matches more exciting to push ahead and show everything one has for that victory. Even having the old levels and music from the previous games to be bought with the in game currency. Even having the famous Teach me Miss Litichi sceens are back for all the history and understanding the Blazblue world, and look it up for a good laugh. Overall, this game easily earns a 8/10. Download and playing now BlazBlue Chronophantasma Extend Full Cracked by RELOADED.