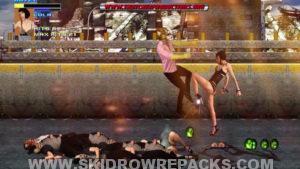 It’s actually a fun little beat’em up in addition to all the obvious eye candy. Mechanically speaking, there are no surprises here. You advance from screen to screen using combos, jump attacks, and special moves to beat your enemies senseless, racking up a score as you work your way to the end of each level to fight the boss.

As you progress, you unlock new characters to play in the following levels, keeping the experience fresh with new attack animations to use against new enemy types, as the opposition grows tougher and more numerous. The beat’em up levels are interspersed with some mini-game levels involving guns and car chases, which also get progressively harder. Additionally, there are portals you can occasionally use to take a different route to the end of a level.

The game comes with the normal mode where you control one girl on screen and the difficulty corresponds to that. There’s also the more entertaining Xtreme mode where the AI controls the other girls simultaneously as you all beat things up together, although the opposition is a lot stiffer to compensate. There’s a training mode, a survival mode, and separate modes for the shooting and car chase mini-games if you particularly enjoy those.

Call me shallow, but simple games like this combining good music and classic gameplay in one daringly sexy retro package are one of life’s small pleasures, and this one is well worth the low price of admission.