SKIDROW Repacks – English Visual Novel game WILL A Wonderful World Full Game released on 13 June 2017 for PC windows. Become a god and help change the fate of people, even the world! In WILL: A Wonderful World, you will receive letters written by characters living in urban cities. By rearranging the order and combinations of sentences in these letters, you are going to alter the destiny of whomever that wrote them.

WILL features multiple storylines centering around a cast of 8 or so main characters. Some of these characters are more or less interesting than others, but in general all of their stories are engaging. I enjoy my VNs to read like actual novels, which this game achieved: the narratives are focused and meaningful, with little meandering, and for the most part the characters feel like real people. It does start off a little slow but within a few chapters you should be hooked. Each chapter in a character’s path is essentially a self-contained short story. One issue that does arise is that, due to the nature of the game, you will jumping in between different character’s stories, and it can be difficult to keep track mentally of what is going on in which branch.

The interface of this game is very clean, which I appreciate. Possibly my favorite of any VN I’ve played so far. The backgrounds are not unnecessarily gaudy and there are no talking faces or other clutter to detract from the text. The text itself is well-presented and comfy to read. My only issue here is that the pace of the auto-scroll feature is very brisk, and there seems to be no way to adjust it. I ended up not using it at all as it left me no time to digest the lines. 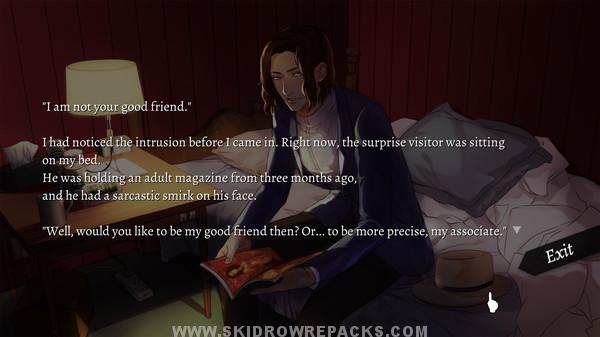 I believe that the biggest drawback of WILL is the actual gameplay, which is ironic, as that is what drew me to the game in the first place. The idea is that you are cutting up and rearranging segments of the character’s stories in order to alter the outcome, for better or worse. This means each story fragment has multiple endings on its own, but most of these boil down to one or two good/canon endings, and a handful of bad endings, which are pretty much all the same. The difficulty of ‘solving’ these gameplay segments either falls into the ‘clear-cut and easy’ category, or the ‘totally obtuse and non-intuitive’ one, with really no in-between. For the latter, you will probably devolve into trial and erroring, as there really isn’t any way to know what will happen unless you do so. I personally was expecting more of a logical puzzle-solving aspect to it, which I didn’t get. I would be curious if the segments I had issues with made more sense in the original Chinese. It was a unique and ambitious idea, but I don’t think it really rose to its potential here.

1 thought on “WILL A Wonderful World Full Version”