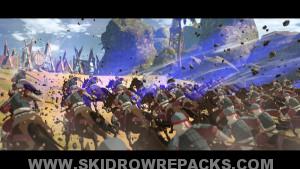 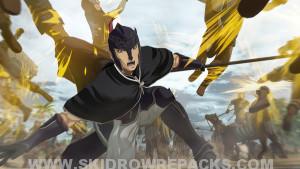 In order of increasing rarity you have C, B, A, (possibly S as well, I will change this once if I find one). As you go up in rarity you get more passives per card. There is a mini card crafting menu that lets you combine (10) cards to create a new one.
What I did enjoy though is the mount combat, I haven’t played a dynasty game where you kind of want to fight on your horse. You can actually pull of combos, which I find is a very nice touch.

Weapons, you can carry two at a time and can swtich between them in combat. The weapons work in such a way that as you keep using your selected weapon and defeat enemies it will get stronger by recieveing elemental effects and increased combos. And you can get different weapons which have different elemental properties, there are 4 in total.

The story mode follows the current season 1 anime very closely, so if you haven’t finished watching then I would suggest to avoid this game if you don’t want any spoilers. Progression through the story is seamless it goes: Battle -> story cutscene -> battle -> story cutscene -> battle and repeat. There is no pause in between to equip cards or weapons, it is all done in the menu during the battle phase.
The game is quite linear. You are free to move around and kill enemies, but eventually you have to complete a certain objective to advance. The stages are broken up in segments, so continuing with my explanation, you have to do/complete certain objective to advance to the next segment. You cannot proceed if you don’t complete it.

Then of course you have all the different characters you can play, each having their own skillset and weapon of choice.

I should also mention that there is online-coop, I personally haven’t tried it yet, maybe a bit down the road. But it is there for those that want to jump into online play right away.

Graphics, I feel are very nice, the whole anime-style drawing of characters with the 3D-ish backgrounds. You have many graphic options in the menu that you can mess around, which I feel is very nice for those that do like to change their graphical settings. I’m not so great with the terminology with these settings, I just set it to whatever they give me, but I will say the visuals are very pleasing to my eye.

Overall this is great game, a solid “warriors” type of game. And one last time, I can’t stress this enough though, you must like the anime in order to get the full enjoyment out of this game, else the game will be mediocre to you. I hope this review helps you decide in purchasing this game or not.