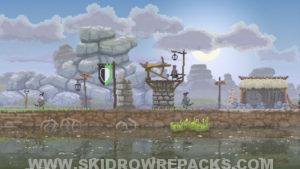 Kingdom: New Lands is the expansion to the original game Kingdom. The original game kept me busy in it’s beautiful forests and country sides while being intranced in the calming music. This expansion has changed so much that it’s hard to know where to begin, but I’ll break it down into four catagories:

This game in Kingdom: New Lands consists of defending your kingdom against waves of enemies, doing this by building up defences with the money you earn when your archers kill animals or farmers finish their crop. These enemies vary from small and easy to kill to large and near unstoppable. The gameplay is kept fresh between games due to the random map generation. Also this is all accomplished with three buttons.

The graphics in Kingdom and Kingdom: New Lands amaze me they are incredibly beautiful yet simplistic. To put it lightly they are stunning, and now with the addition of seasons they are near perfect.

The music in this game is composed by ToyTree and let me just say the music is great to listen to, in game or out. I highly recomend getting the Royal Edition so as to get the soundtrack with the game.

Alot changes in each game of Kingdom: New Lands, this is due in part to the rando map gen and the rouge like elements, but also to the large amount of options available to you in game. This game does not lose it’s steam after many playthroughs nor does it detract anything from the expierience.

Overall Kingdom: New Lands sitcks with the best parts of the original Kingdom while bringing an incredibal amount of content to the table. Buy it now, show support for devs who add this much content to a game! (Also most of my time in this game was without steam so I have near 9-10 hours overall through betas and such.)