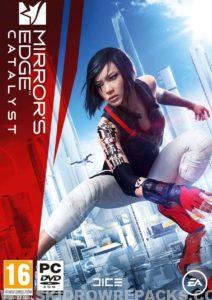 The mobility in this game is amazing, the visuals are also very nice. Controls are very easy and it is very easy to execute a number of different jumps, landings and combat moves.

Combat isn’t a highlight in this game, however there is combat if you choose to fight instead of running past guards, sometimes the game forces you to fight instead of run. You can pick up a firearm after a taking a guard down and use it until its clip runs out which I like because its realistic, or you can decide to simply use hand-to-hand combat and skip firearms all together.

Length: EXTREMELY short. Steam says I only played the game for only 4 hours on its most difficult mode. I didn’t do any of the optional challenge modes that you can access from the main menu however.

The story Mirrors Edge Catalyst Full Version is extremely hard to follow, and is not all that interesting to be honest,

This is not an open-world game. The game basically drops you into a new location at the start of each mission, of which you parkour to the end of it on a more or less singular linear path.

I was actually gifted this game, but if I paid 50 or 60 dollars for this game I would have been very angry, because that would have felt like a genuine ripoff due to its length, on top of the fact that the cutscenes in the game are artist renderings, meaning it doesn’t use the in-game graphics at all during cutscenes, it is a stylized cartoon basically, so they didn’t have to put time into rendering animations at all.

The parkour is extremely smooth and FUN, you actually get real adrenaline pumping when playing this game, I just can’t justify its length or its horrible story, or the fact that its extremely linear.

There isn’t much replay value here either, due to how severely linear it is. It may be fun to come back to this game in a year or two to replay it, but other than that its just too short and too linear.