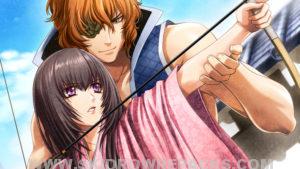 Review Destiny’s Princess A War Story, A Love Story Full Version: In Destiny’s Princess: A War Story, A Love Story, you are the princess of a country in a world based on ours during the Warring States period of Japan (1467-1603). Overrun by demons, the country is slowly falling into ruin — but your family has an age-old heirloom that is known to grant wishes only in the most difficult of situations. Desperate for help, you call to the heirloom for aid, which puts five heroes at your beck and call… But every wish has its price. Will you be able to save your country and will the hero you love stay by your side?

Brought to you by the same studio that was responsible for The Men of Yoshiwara: Kikuya, this game is a definite improvement compared to that one in many ways, and certainly not just a copy. Almost no grammar/editing/translation errors anymore, a better soundtrack, higher quality images, and a full-screen option that is actually viable — though it does have slightly less content than Kikuya.

Cons:
-Some QC errors with a good chunk of typos, missing grammar, and awkward sentences. (Still better than Kikuya’s QC problems though)
-Game fell short of a good bit of potential the story and characters had
-Became somewhat dull in places

All-in-all, this game doesn’t shy away from tragic endings and drama, and I thought it was nice how differently the heroine develops throughout the different romance routes. And a tragic ending with a lot of death doesn’t necessarily mean it’s all over… illustrated very nicely by ending B with Nobunaga (save him for last!) which is probably my favourite one. I wouldn’t necessarily buy it at full price, though, since there are romantic visual novels/otome games with a better story and better characters (such as Nameless), but you can definitely get some enjoyment out of this one, too! Download and playing Destiny’s Princess A War Story, A Love Story Full Version now.