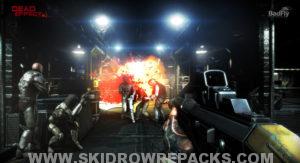 Review : Dead Effect 2 Full Version is one of the best Mobile Ports I ever played, but it needs still some improvements. First of all it’s a really good game, didn’t expected so good graphic for a mobile port.

Story/Gameplay : You are a cyborg and wake up in a laboratory on a spaceship, your brain and functions are disabled, you get free and have to kill zombies. There is a RPG System for skills and you can upgrade yourself with plugins and armor.

I started the game, where you can choose between three characters, I chooses the bow & sword guy, because I like this kind of weapons. There are also an assault rifle guy, and shotgun girl. I play with keyboard and mouse and first movement was insane, I just tipped my mouse and the char was making 15 turns. 😀 So I adjusted the sensitivity, now I’m fine. Now if have to move there, click there and kill zombies they got released to stop the army who try to get over the ship, problem is they stop me too. As I can see, you can play the game in co-op what will bring more fun probably. (Didn’t tested it). By the way, never saw such big crosshair. XD

With every level you can unlock a skill and upgrade them, with founded money you can buy/upgrade weapons/plugins/armor.

You find your missions in the middle of the control-room where you choose the actually one or previous maps, bad thing if you choose the first map/mission again you have to redo the tutorial and you can’t skip the cutscene, it’s a little bit annoying.

Graphic : The graphic is decent for a mobile game but could be a little bit more polished for pc gaming, since it is early access it could be done.

Sound : I like that the game have voice acting but its monotone without any emotions. Some other sounds like hitting with sword the wall, sounds strange.

Summary : Dead Effect 2 Full Version is a good game with room for improvement.