SKIDROW – PC game Treasure of a Blizzard Free download released in 18 Oct 2016 by SKIDROW Repacks. Treasure of a Blizzard Full Version is a fantasy themed visual novel inspiring with beautiful arts and interesting game characters. The fate of the protagonist completely depends on your choice. Probably your character may meet his partner in life; however he may also meet the end of his life. You’re the ones to choose. 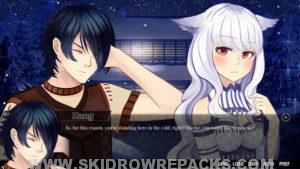 The young officer is transferred to the capital where he is supposed to be under 24/7 control of the Emperor’s people as a sign of loyalty towards his mutinous father. It’s ironic that the young officer is convoyed by his Childhood friend, Lin. Now she’s serving as one of the Emperor’s guardian and each mission will be valuable for her career. However first, these two have to get over the Mountain Pass and here is a rumor stating the mystical things happen in that place.

Lin : She is a childhood friend of the protagonist who is convoying him to the capital city and she is afraid of ghosts. Lin loves money very much. Her family is one of the main authorities of the Empire. Her mother is originally from the Western realms. Lin inherited her color of the hair because of her mother’s origins. And Lin was bullied because of that color. She joined the guardians after Kang had joined the border troops.

Mei : She is a tavern-lady who runs a guesthouse in the wilderness of the mountains. Kang sees a blue flower on her head and nobody else sees that flower. Sometimes, when she gets angry her eyes began shining. She loves gamble-games, and, most of all, she is mad about the game that was explained to her by some guest who was passing by that place.

Shan : She is the leader of the werewolves and she is a cold white she-wolf. There are rumors about her people that spread among the humans.

Kang : His mother passed away when he was quite little. So he has vague memories about her. Kang used to play with Lin during the days of their childhood.

NOTE:
You are also able to change dynamically the level of censorship: starting with the complete censorship level up to the light version of censorship (when you are able to see the open top of the body).

11 thoughts on “Treasure of a Blizzard Full Version”