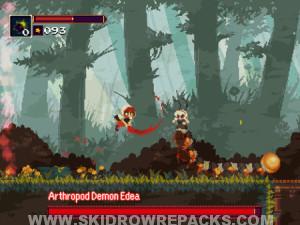 Controls and Combat
In this type of game, the two things you’re going to do most are running/jumping around as you explore and fight enemies. M:RUM does both well. At first, the controls might feel slightly deliberate, but you’ll soon get used to them and by the end of the game you’ll be flying across the screen with air-dashes as a cat and it all just feels good. The character mobility as you progress throughout the game is great. You’re never fighting the controls, and the roll dodge mechanic is worked in quite well and it’s not something you see in many 2D action games.

Combat is a bit simple. You have your melee combo attack and a bow with infinite arrows and long-range. Most enemy encounters are rather simple outside of their consistently strong character design and you’re best bet is to rush and bring the offensive to them instead of sitting back and trying to gauge their attacks. Despite that, combat just feels good. This is completely a “feel” thing, but I never got tired of fighting regular enemies despite the general nature of encounters being rather limited in options. It helps that no enemies are health sinks, as most enemies die after a few hits and never become a chore to fight.

Gameplay Momodora Reverie Under the Moonlight

The level design and interactivity is very well-done. You can legitimately play a large portion of the game in any order you want. You unlock power-ups by finishing each area that increase you mobility, combat ability, and give you the ability to warp, but there’s nothing stopping you from doing so in any particular order. This gives the game a lot of replay value. Almost all bosses have unlockable shortcuts that place them right next to a save point.

Momodora Reverie Under the Moonlight Full Version has an equip/item system where consumable items recharge at save points. I really like this mechanic in games that use it and here, it mainly deals with healing items. Equipment is varied and versatile. There’s all kind of accessories that do things like add fire to your attacks, serve as a magnet for coins, give a beep if you’re in a room with a secret item and much more. There’s a ton of mix-and-matching to do if you want to vary up your playstyle a bit.

Visually the game is quite nice, though I wish there were less dark areas. Places like the forest and park look really nice and vibrant and I wish there was a bit more to the locale design color palette. Animations are also great. Things like rolling, notching arrows, attacking and using items look good and it doesn’t look like any corners were cut.

Another big drawing point in this type of game is secrets, and there are quite a lot. Don’t want to spoil anything but there are a lot of little touches in the game that make it worth replaying. As for replaying, there’s a new game+ that lets you keep all non plot-skills and items you unlocked which lets you just blow through the game at leisure and I’m a fan of this type of NG+.

Finally, I’ll get to some of the negative points of the game, which are mostly technical. First off, no remappable buttons. This is weird and is something I hope gets patched in. Next, the in-game V-Sync seems to not work and there is minor screen tearing. This is another thing that seems like it should be patched. The “you got hit” sound effect is also quite harsh and shrill, and I wish I could tone it down. Oh yeah, and a dedicated map button would be nice, too.

On the non-technical side, my major gripe is the instant death spikes. These things are terrible in every game they’re in, and they especially bad here, since it seems like they should just do some damage and let you leap out of them, but no, you just barely tap one and you’re dead. This is by far the most annoying aspect of the gameplay, especially when you cover a decent bit of distance only to hit a spike right before a save point. Making spikes just give a percentage of damage would make the game much less artificially aggravating and not hurt the the level of difficulty at all.

Two lesser quibbles are that enemies do more damage then their attacks suggest, which will put you on the brink of death without you realizing it at times. The last negative is something I touched on before, enemy encounters tend to feel rather samey, though killing stuff remains fun enough.

That’s a lot of words. In short, Momodora Reverie Under the Moonlight Full Version is one of the better 2D actions games I’ve played in years. Non-linear level design lets you progress in any direction you adventure with little artificial gating. Character mobility is great. The item and equipment systems are well-done and give a good dose of variety to the game. There’s no fat or filler to hit some predetermined playtime requirement. This is just a very good, well-designed game I’d recommend to anyone that likes 2D actions games and/or Metroidvania elements in their games.

2 thoughts on “Momodora Reverie Under the Moonlight Full Version”