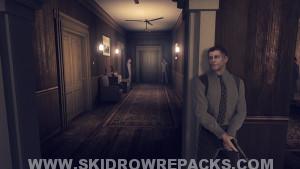 Gameplay Alekhine’s Gun Full Version: The game’s name refers to a famous chess move and – like chess – the developers state that you have to anticipate your opponent’s moves here as well. We all know that this is usually the case for stealth games but does it really apply to Alekhine’s Gun? To be perfectly honest, no, it does not. Except for a few moments maybe. As always I’ll do my best to try and go through all of the (im)perfections during the next few paragraphs.

Anyone who has ever played or seen Hitman should know what to expect here. The goal is to silently complete your objectives, but you can also choose to take the more action oriented road, or use a combination of the two.
Before you start a mission you’re given the objectives and then you can select which weapons and items you would like to bring. You can take up to 6 things with you, and you can unlock some of these items later on with the points you have earned during your earlier missions. There aren’t a whole lot of different weapons but more than enough to get the job done.
You can also use weapons and items found in the levels themselves, although I was disappointed to see that this was kept to a minimum. There’s very little stuff to take and use. This in turn makes it less fun to explore and/or replay the levels and even if you find things to use it usually still isn’t clear what you have to do with it exactly. I found this to be quite disappointing, but I guess it’s just a personal preference.

Your character can also use Focus, which lights up items that can be interacted with as well as which characters are looking your way or are suspicious of you. At times helpful, especially in locations that are packed with characters, but most of the times plain useless. I also still have no idea how and when it refills.
A different meter also fills once you’re being suspected and when it has filled up enemies will swarm in. Most of the times. Sometimes they just won’t take action…

Which brings us to the AI. Since the game’s title refers to ‘anticipation of opponent’s moves’ this part should be (near-)perfect, right? Well, wrong, but I think I made that already clear in the last paragraph. Sure, sometimes it works, but most of the time they’ll react in the most unrealistic way possible. I once threw a knife at an officer sitting in a mess hall – with at least eight characters sitting around him – and all they did was check to see if he was dead, stand there for a couple of minutes and then carry on with dinner. Ten minutes later the guy was still lying face down in his soup and people were acting like nothing happened. This happened in many different scenarios, too, and even though it doesn’t make the game unplayable it does detract from the experience it’s trying to aim for: realism.

There are 11 levels in total and you start with a rather generic, boring World War II flashback mission. I think this was actually a terrible choice for a first level because it’s something that has been done to death. I personally think it would’ve been better if they had found a way to introduce it later on.
The levels complement the story, in a way, but except for a handful of them they just don’t make for very interesting locations. Most of the levels are dull, uninspired and sometimes even too large/complex (like the aircraft carrier).
Depending on your playstyle each level can usually take anywhere between 30 (action) to 60 (stealth) minutes.

But the game doesn’t seem to be made with shooting in mind. Don’t get me wrong; it works, but most of the locations have so many enemies walking around that you usually don’t stand a chance unless you’re well prepared and save often. It just feels a bit like an afterthought.

Since Steam reviews still have a character limit I will go through some of the bugs/glitches in one sentence now. Here we go: map markers showing the wrong floor, crashes in general, heart rate sound bugging out and a spotty cover system.  Apologies for this, I wish this was different and I could be more thorough. Download and playing now Alekhine’s Gun Full Version.