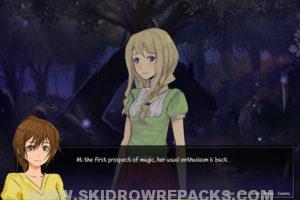 Review : Starlight Vega Full Version developed by Razzart Visuals and published onto steam by Sekai Project comes a yuri visual novel as you play as Aria and romance the two sultry demon girls, Lyria and Scherza, or your best friend Melody in this yuri visual novel where your choices will ultimately decide the fate of this spellbound girl.

The story Starlight Vega Full Version: You play as Aria, a girl who moves into her grandfather’s old house. While exploring the upstairs study one night, she and her friend Melody accidentally unleash a flirtatious demon named Lyria, who spent the past fifty years in a stone. After freeing her from her prison, the two become attached by a ‘lifestone’, which means Lyria can’t go far from Aria without feeling repercussions, and vice versa. Now Aria, an ordinary highschool girl, must find a way to free herself from Lyria, who seems to crave the exact opposite. Add to that the increasingly realistic dreams plaguing Aria, the sexual tension between Aria and a select few girls around her, and the supernatural phenomena – it seems like Aria’s life will never be the same again.

The story overall is interesting but I was not captivated by it and it has failed to immerse me into the story because the individual routes each has their weak points in terms of there were some important points that were not explored on that individual route, for example 1 of the routes did not explain or even hinted of how Lyria got trapped in the stone. I am not sure which route is that. Apparently among all the character routes I liked the harem ending the most it felt more interesting than the other “good routes” as it touches on almost every topic and the characters in harem ending has more “backbone”they all group together and fought “Reid”.

Character wise I like Scherza: Current Queen of the demon realm. She has a very icy personality and little like for humans. The pacing her route is alright it is not to fast or slow. The main reason I liked her from the start is provably because of her looks and character design she fits into the character personality perfectly, she looks so intimidating and “royal like”.

Audio and Visual elements :
Visual Elements –The visual elements is provably the most distinctive feature in the particular visual novel I absolutely adore the artwork and art style being used in this visual novel and it is very consistent with character sprites, not to mention the backgrounds are very beautiful as it compliments nicely with the overall art style.

Audio Elements – The music sets the mood for every situation, but it is not memorable and did not leave an impact on me. I think they could have done better for the music because I felt that certain soundtracks was repeated too many times and some were just plain boring.

To Sum Up :
To sum up do I recommend this visual novel? Simple answer, yes. People who likes yuri will definitely enjoy Starlight Vega as it is very heavily yuri themed and the romance does not feel forced. Something else worth mentioning is that for the yuri scenes they are all very descriptive and detailed, overall an enjoyable read from the start to finish. I have been provided a review copy for Starlight Vega Full Version but it has no impact on this review in any way. Download and playing now Starlight Vega Full Version.