SKIDROW – PC game The Hive Free download released on 27 Aug 2016 by ALiAS include music addon. Game The Hive Full Version is a story-driven fantasy game. Gorgeous music and a beautiful visual design takes you to planet of New Eden. 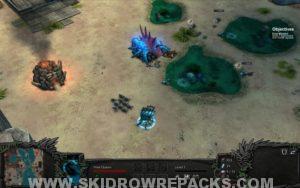 You start off with a single worker and must build a Hive (your primary building) which allows you to construct more workers, a hive queen and eventually a medic. In this game, You will need to gather food to allow you to build more units. You must then construct a barracks to get your first fighting units; one melee, and one ranged.

The melee unit comes in a pack of 6 while the ranged comes in a pack of 4. Resources are what allow you to build these building however food is vital. This game is nice but the camera controls seems off to me. RPG aspect that the developer has added is fun but still unrefined along with the DNA aspect as we are never formally introduced with the features as of yet. On Act 4 the difficulty curve is immense right now and It is hard to beat as your enemies clearly outnumber you and are quick to strike in force. However, from what I know the developer is planning to add a turret type building and I can see the potential for this game.

Game The Hive Full Version is a fun strategy game with a good story. The scenery is nice along with the music, however two of the game mechanics are not mentioned (RPG and DNA). There is currently a huge difficulty curve existing within the game but the developer is planning to add more content which should help even that curve out. The developer is in the discussions and will be happy to reply to you. I suggest getting this game if you like the trailers, but I suggest doing your research to see what has been added/ going to be added. Currently the game is unrefined but its future seems bright.